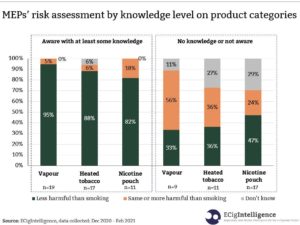 Europe’s Beating Cancer Plan was presented by the European Commission to the European Parliament on 4th February 2021. MEPs are currently developing a report on Beating Cancer which is set to be finalised by the end of the year. Tobacco – along with alcohol, poor nutrition and lack of physical activity – was highlighted as a common cause of cancer. One of the main topics of debate during future legislative discussions will be the role played by so-called tobacco harm-reduction products.

ECigIntelligence surveyed a group of MEPs to find out their views on new nicotine products such as e-cigarettes (vaping), heated tobacco and nicotine pouches. Our survey was carried out online and anonymously, and all data remains confidential other than in consolidated analysis. The survey was sent to all MEPs (from all member states and political parties) and responses were obtained from over 30 MEPs, representing nearly 5% of the European Parliament. This is a summary of the most interesting results.

Awareness and knowledge of products

MEPs have differing levels of knowledge of the different types of new nicotine products, with vaping being the most understood and nicotine pouches the least.

At least a third of MEPs have no knowledge of each type of new nicotine product. 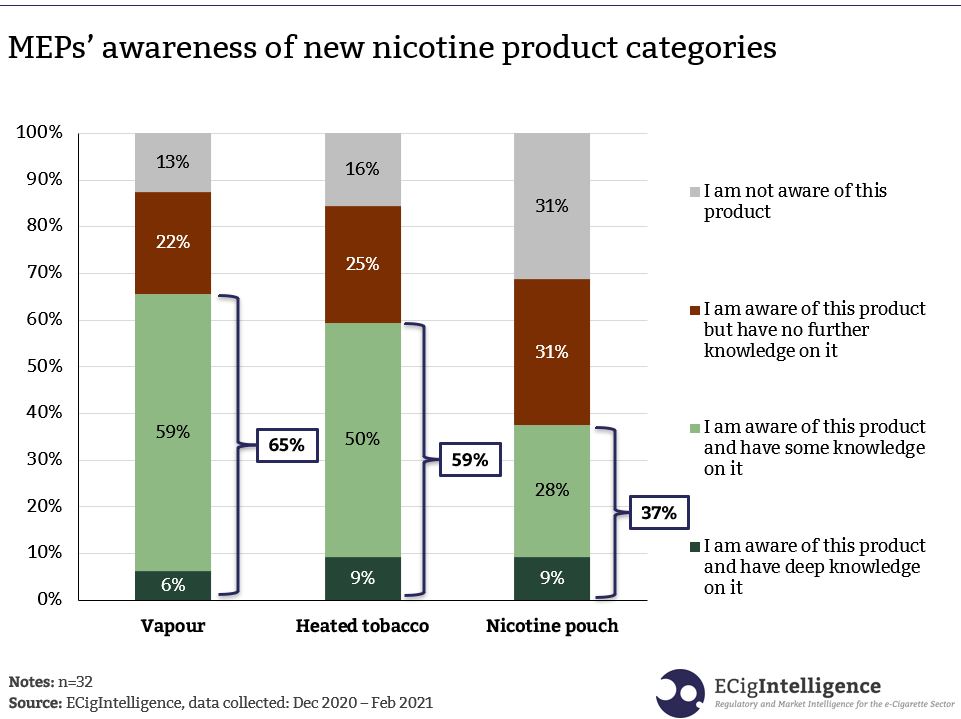 Does knowledge about these products influence MEPs’ attitudes?

MEPs who are knowledgeable about these products are far more likely than those with no knowledge to consider the products less risky than smoking.

MEPs with knowledge of the products are also much less likely to be undecided about risk.

MEPs without knowledge of the products often think that nicotine pouches are safer than smoking, but tend to believe vaping is at least equally dangerous. 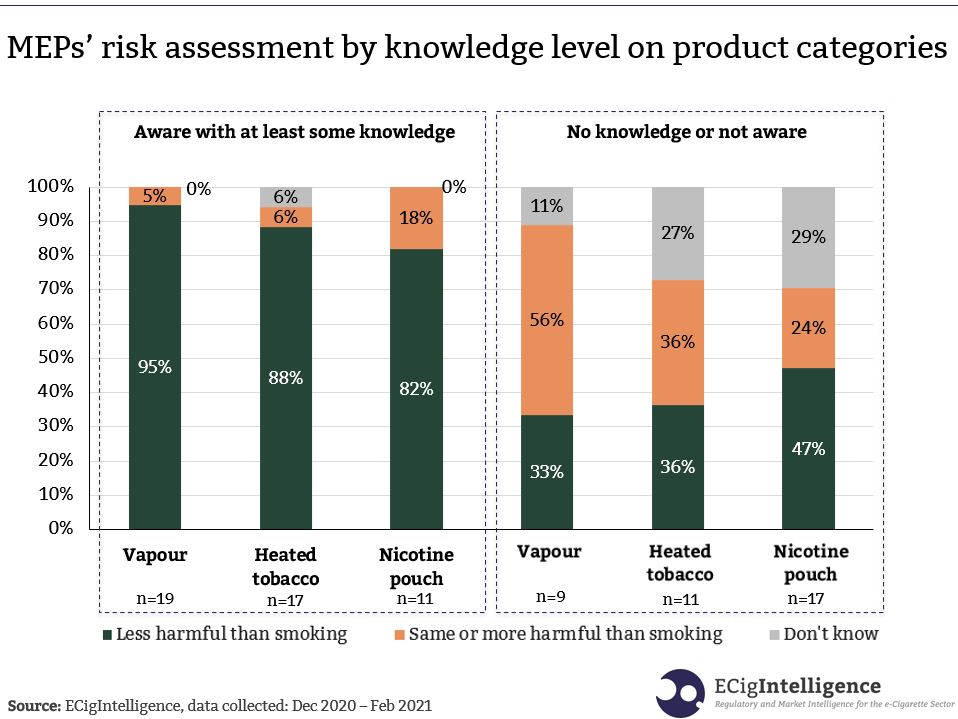 The majority feel that these new nicotine products are likely to help existing smokers quit. 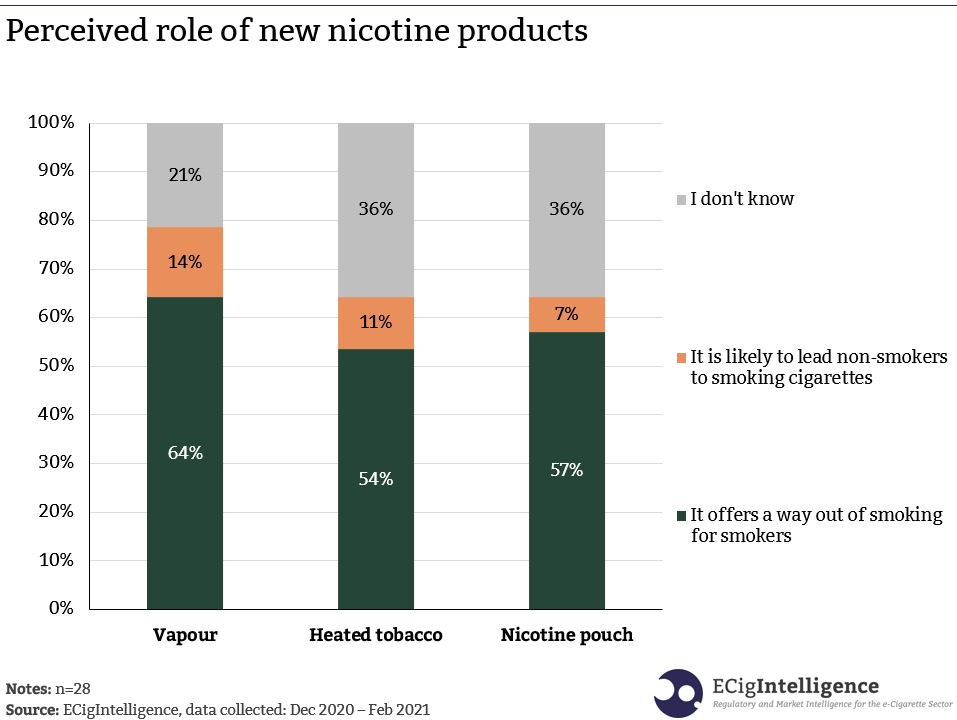 A majority of MEPs believe that all new nicotine products are safer than cigarettes.

75% of MEPs say that vaping is safer than smoking, but up to one in five think that some new nicotine products can be as risky as smoking. 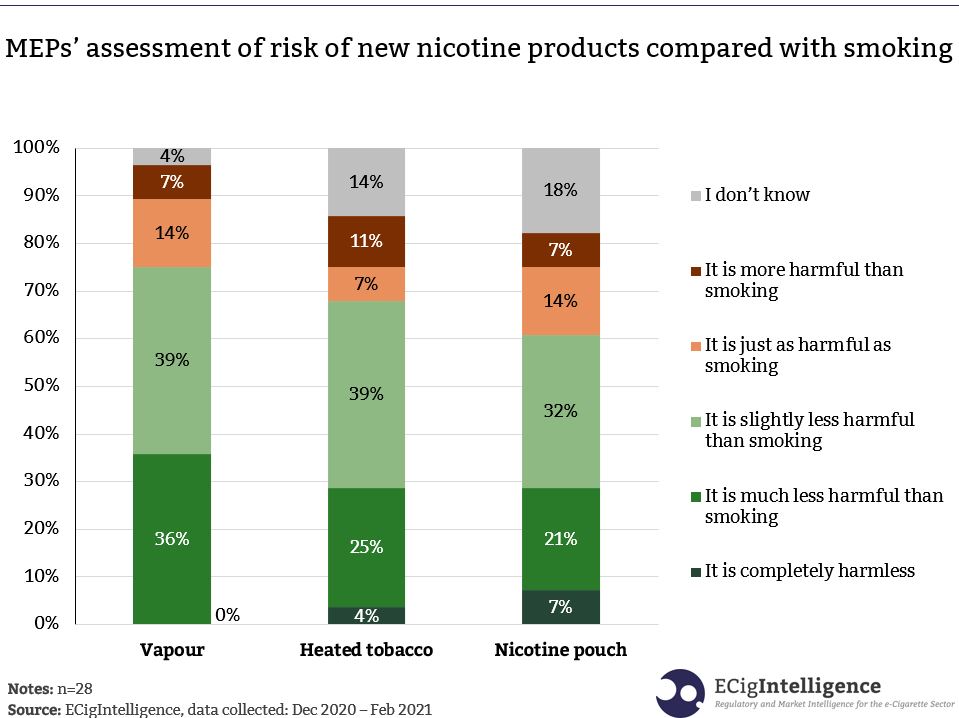 How should new nicotine products be regulated?

Around 70% of MEPs feel that online sales of all these new nicotine products should be permitted.

Almost half of MEPs believe that rules on advertising all these products should be the same as for traditional tobacco.

Around a third of MEPs say flavours should be regulated less stringently than traditional tobacco. 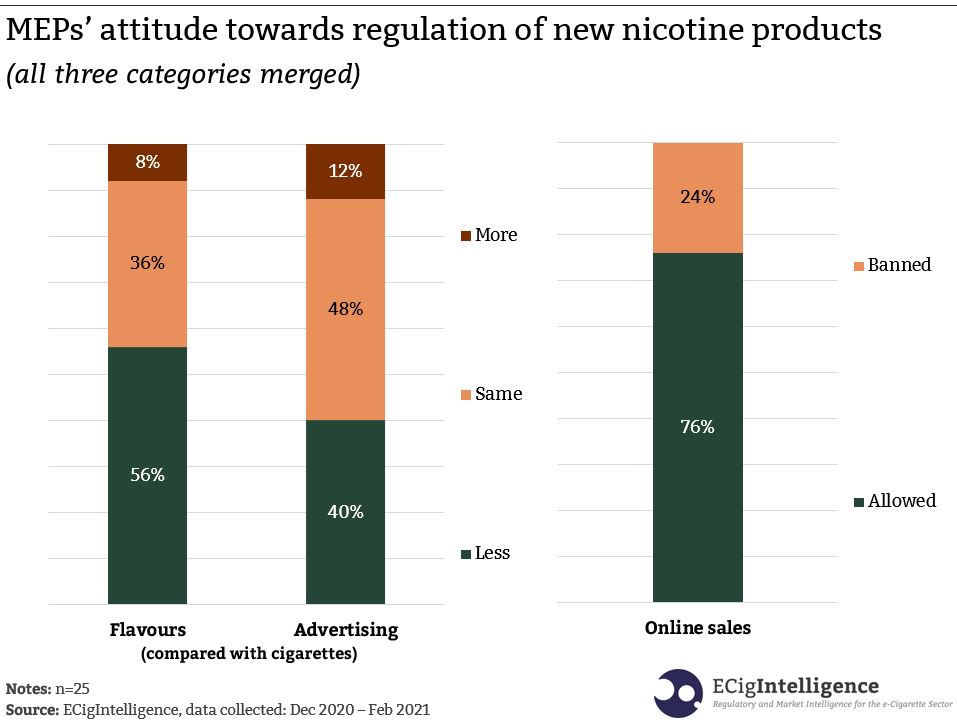 The more EU politicians know about vaping, the less risky they think it is

We also invite you to enjoy our FREE TRIAL

Sign up to our platform and you will have access to our latest business and regulatory news analysis, which keeps you updated with the latest hot topics in the sector.