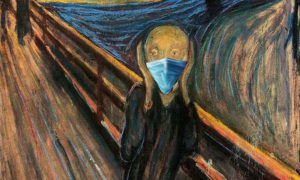 Press reporting that sensationalises accounts of scientific studies is hardly new, whether it relates to the supposed dangers of vaping, coffee-drinking or anything else. Whether such misleading reports are the result of failures of understanding or deliberate misrepresentation is not always clear. But there is no doubt they can be unfair, sometimes downright dangerous.

When it comes to scare stories that whip up unfounded associations with Covid-19 during the pandemic, you have to question how responsible that is.

Take these two recent statements from the British press.

Vapers [are] up to 17% more likely to spread coronavirus because it gets blown around when they breathe out”.

That’s from the Daily Mail, the UK’s biggest selling newspaper and one of the world’s top online news sources.

Vapers who have Covid-19 are up to 17% more likely to transmit the virus, spreading it in clouds of smoke”.

That’s from The Telegraph, once considered one of Britain’s most reliable news outlets. For its headline it inflated the figure to “up to 20%”.

Let’s leave aside for the moment the fact that The Telegraph apparently can’t tell liquid aerosol from smoke – how accurate is that 17% figure, and where does it come from?

Both papers purport to be reporting on an international paper, “Aerial transmission of SARS-CoV-2 virus (and pathogens in general) through environmental e-cigarette aerosol”, published by medRxiv.

The lead author of that study, Roberto Sussman of the University of Mexico, was not happy, tweeting: “Sloppy journalism spreads contagion panic”.

Another online resource that actually took the trouble to read (and understand) Sussman’s paper concluded: “The study actually found that, for the vast majority of UK vapers, the increased risk of transmission is around 1% compared to someone who is just resting and breathing. This is considerably lower than the increased risk of transmission from talking or coughing.”

It’s worth noting that this is not from any source within the vaping industry or some propandising enthusiast for vaping, but from the strictly non-aligned Full Fact, a registered UK charity whose mission is to fact check claims made by politicians, public institutions and viral content online as well as sloppy journalism.

And that 17%? Full Fact explains: “90% of vapers in the UK use low powered vaping devices. For the minority who are classed as high intensity vapers, which is usually associated with using a rarer advanced tank system e-cigarette and can create large vapour clouds, the paper estimated the added risk rose to between 5% and 17%.”

As far we know, neither the Mail nor The Telegraph has run an article yet on the dangerous habit of speaking.

What vaping does do, of course, is make the user’s breathing visible, and detectable by smell – and therefore arguably more avoidable. But saying that would be letting the facts get in the way of a good story.

To ban or not to ban, that is the question over e-cigs during COVID-19 pandemic