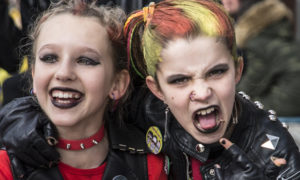 Is youth vaping a typical passing teenage fad? If we’re to believe the US website moms.com, the self-styled “#1 site for moms seeking advice, community, and entertainment”, the answer would appear to be yes.

A recent article on the site about declining rates of vaping among US high schoolers sets the scene in these bland pseudo-psychological terms: “Teens have found a way to rebel and try to feel older for generations…the teen brain just has to figure out something that parents don’t approve of – and sometimes it’s more than a little bit dangerous like vaping.”

If that’s true, and e-cigarettes are just today’s – or yesterday’s – equivalent of winklepickers, mohican haircuts and do-it-yourself body-piercings, then what moms.com hails as “good news among the craziness of 2020” is surely bad news for the e-cigarette industry. Here today, gone tomorrow.

On the other hand, that very sentence goes on to talk about “the most recent trend of e-cigarettes, which caused a nationwide epidemic of severe lung damage”, a piece of lazy hack-work so founded on received ignorance that it makes it harder to take seriously anything Mom says. Which is at least fairly appropriate, since not listening to Mom is stereotypically a common teenage trait.

If the element of danger (even, or perhaps especially, exaggerated danger) is indeed an attraction, could it be that the kind of scaremongering the press (including moms.com), many regulators and other well-meaning bodies have been increasingly indulging in has amounted paradoxically to an encouragement to teenagers to vape? Tantamount to advertising that thrilling element of risk. Mom says don’t, so let’s do it.

Perhaps more pertinent, and undoubtedly more scientific, is a study by researchers at the University of California San Francisco (UCSF), which reports: “Most parents know or suspect when their child smokes, but they are much more likely to be in the dark if the child vapes or uses other tobacco products.”

Setting aside for a moment that this team – apparently like almost everyone in research or regulatory positions in the US – seems incapable of distinguishing between tobacco products and tobacco-free e-cigarettes, this study, which tracked more than 23,000 youngsters between the ages of 12 and 17, does have some interesting things to say.

One is that strong rules laid down by parents against using tobacco (or, presumably, e-cigs) in the home apparently make children less likely to take up tobacco (or vaping). That is only “apparently” because the team appear to have overlooked the fact that children of strict parents are more likely to keep secrets – and that may surely also apply to their honesty or otherwise in answering researchers’ questions.

Indeed, the headline discovery is precisely about secrets kept from parents. An interesting side-angle on that is pointed out by one student researcher, who remarked: “Low parental awareness of e-cigarette use belies rising public attention to youth vaping.”

And let’s try to look at this for a moment from the perspective of rebellious youth. If the headline on this report gets wide coverage – “Parents less aware when their kids vape than when they smoke” – that might sound to the teen brain like a solid argument in favour of vaping. Whether it’s “a little bit dangerous” or not.

E-cigarette use by US school students falls by a third in a year, CDC reports