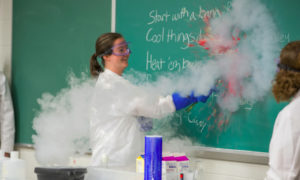 At first sight, the two headlines appear very similar: “Labeling e-cigarette emissions as ‘chemicals’ or ‘aerosols’ increases the perceived risk of exposure” and “Accurate labels like ‘aerosol’ or ‘chemicals’ increase perceived risks of e-cigarette use”. The ironic thing is that while both fairly accurately reflect the study being reported, one – the one that uses the word “Accurate” – is not quite so, well… accurate.

As any chemistry teacher will tell you, everything is composed of chemicals – you are, your food is, the screen you’re reading this on is made up entirely of chemicals. Which makes the labelling of e-cig vapour as “chemicals” self-evidently true at one level, but deliberately misleading at another. (Don’t drink that water, it’s nothing but chemicals!)

As it turns out, those headlines – one from News-Medical.net, the other from Medical Xpress – are placed over identical reports (i.e. an uncritically reproduced press release) of a study published this week in the Journal of American College Health. And the very title of that study, “Aerosol, vapor, or chemicals? College student perceptions of harm from electronic cigarettes and support for a tobacco-free campus policy”, tells you at once that this is hardly unbiased science, seeking answers not yet known, but rather that sadly common form of pseudo-science that starts out with its conclusion in place and sets out to “prove” it.

The study of college students in 2018 and 2019 found – not altogether surprisingly – that those asked to assess the harmfulness of secondhand “aerosol” or “chemicals” emitted by e-cigarettes were more inclined to see them as dangerous than those who were asked to assess “vapor”.

It also found, unsurprisingly, that they were around twice as likely to support a tobacco-free campus policy. This being the US, where authority routinely seems to miss the point that e-cigarettes don’t contain tobacco, we can take that to mean a vape-free campus policy too. Which, it is not hard to assume, is exactly what the researchers wanted them to support.

The study’s conclusion is itself a masterpiece of deception (perhaps self-deception). It is this: “Health campaigns should use accurate terminology to describe e-cigarette emissions, rather than jargon that conveys lower risk.”

Just how the term “chemicals” – which, after all, encompasses every breath you take – is more “accurate” than “vapor” the authors make no attempt to explain.

Now it may be true that much research which purports to support e-cigarette use is equally tendentious, setting out with its conclusion already prepared. And it is certainly true that “vapour” is technically a less accurate term than “aerosol” for what is emitted by e-cigarettes, which is a suspension of liquid or solid particles in a gas.

But to respond with such blatantly bad science, calling for accuracy while merely pretending to be accurate, is no help to anyone who really wants to discover facts as yet unknown. And there are plenty of those yet to be discovered in the field of vaping.

Oh, and the answer to the question posed in the headline above – Do the words used to describe vaping alter perceptions of risk? – is: “Yes, of course”.

How EVALI, and the way it was reported, damaged perceptions of vaping