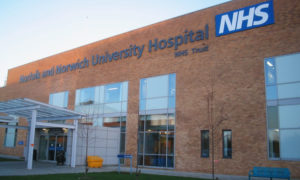 It seems hard to imagine now, but it’s not so many years ago (in the UK, at least) that one might slip out of a ward into the hospital corridor to smoke. More recently you would find the smokers congregating outside the hospital entrance. Now almost anywhere in the grounds might be a smoke-free zone.

The link – or rather the opposition – between smoking and health is pretty clear and hard to avoid. You won’t see anyone lighting up in the A&E waiting area. Or if you do, they’re apt to be dealt with quickly and firmly.

And one of the ways they might be dealt with is by being offered free e-cigarettes.

This may seem strange, eccentric – even downright reckless – to people like Reina Roa, praised by the World Heart Foundation as “a trailblazer in tobacco control” and a leading negotiator behind the World Health Organization Framework Convention on Tobacco Control (WHO FCTC). Roa, a professor of epidemiology and expert adviser to the Panamanian Ministry of Health, was the driving force behind last week’s decision by Panama’s National Assembly Health Committee not to approve a bill to legalise e-cigarettes.

This refusal leaves open ground for familiar arguments about the relative perils of a black market rather than a regulated one, and whether denying them access to alternatives will keep smokers smoking.

And there is certainly a wide middle ground between Roa’s absolutism and the vape-friendly approach of the British health establishment – equally extreme in world terms – that hands out free e-cigs at hospitals.

Put that in your pipe and smoke it

Five UK hospitals, in London, Edinburgh, Leicester and Norwich, are engaging in a 30-month trial in which smokers will be randomly assigned to groups given either stop-smoking advice or free e-cig starter packs.

One of the trial leaders, Ian Pope of the Norwich Medical School at the University of East Anglia (UEA), said around a quarter of the 24m people who visit Accident & Emergency departments in the UK each year are current smokers.

His colleague Professor Caitlin Notley explained further: “Many people who smoke want to quit, but find it difficult to succeed in the long term. Electronic cigarettes mimic the experience of cigarette smoking because they are hand-held and generate a smoke-like vapour when used.

“They can be an attractive option for helping people switch from smoking, even if they have tried and failed in the past. We know that they are much less harmful than smoking tobacco, and that they have been shown to help smokers quit.”

Dr Roa and many others on the sceptical, antagonistic or merely more cautious side – including, for now at least, the WHO – might beg to differ.

Smoke-free or nicotine-free? That’s the question the WHO must consider