To various extents, 39 states and the District of Columbia (DC) have enacted laws to legalise and/or decriminalise marijuana (also known as cannabis) for medicinal and/or recreational purposes. Our map below shows the current legal status in each state. 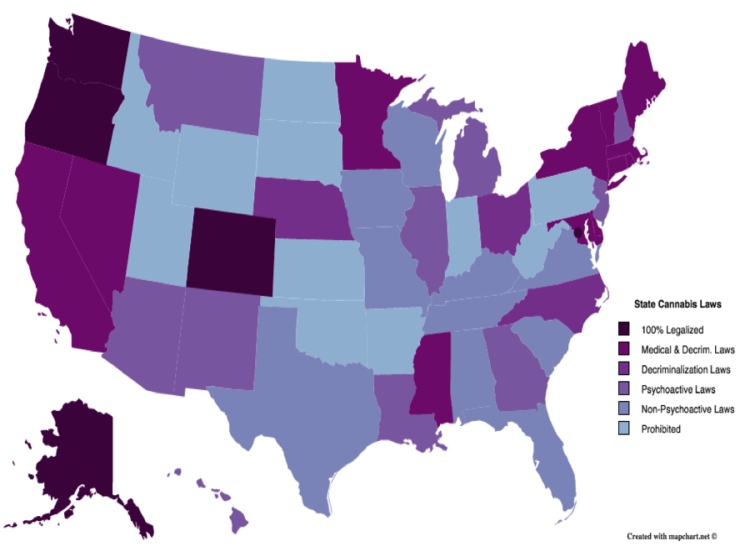 This increasing legal tolerance of marijuana gives many Americans the chance to get high without breaking the law. It also gives e-cig companies an opportunity to diversify their portfolios by investing in cannabis-compatible vaporisers, which we are labelling “c-cigs”.

While some consumers may be attracted to vaporisers designed solely for cannabis use, others will find blended e-juice or marijuana oil appealing.

There is a large potential market for marijuana. In a 2013 poll, one in four Americans said they would buy marijuana if it were legally available. By no means all of these people are currently using: in 2012 only 19m Americans aged 12 and over, or about 5% of the population, said that they used the drug. There is also a well-known overlap between the cigarette-smoking and cannabis-smoking populations.

E-cig manufacturers are the ideal makers of c-cigs because of their technological expertise. Dutch firm E-Njoint is leading the way with its Vaporizer, which allows users to vape dry herbs (such as marijuana or tobacco leaves), wax, and oil without any combustion. However, despite being available throughout Europe, the E-Njoint is only stocked by one U.S. retailer: the Blue Smoke Vape Shop in Myrtle Beach, South Carolina. (Interestingly, this state prohibits cannabis use in all forms.)

Other vapour companies have also started to capitalise on this large potential market by offering cannabis-related products. Pax Labs (formerly known as Ploom), for instance, sold over 500,000 units of the first incarnation of its heat-not-burn vaporisers (also called Pax) for $249 each. Although marketed as intended for tobacco, these were cannabis-compatible and allowed Pax to capitalise on the rapidly-expanding market for vaporisation products that can be used for marijuana.

The company’s founders, James Monsees and Adam Bowen, insist that “Pax is currently a tobacco product” but Monsees says: “We would love for this technology to be applied as broadly as possible. That was the concept from day one. We did not want to build a tobacco company; it was to build the greatest vaporisation company possible.”

Underlining the suitability of e-cigarette technology for cannabis is the trend among consumers themselves to modifty e-cig products for the vaping of marijuana (in oil form) undetected; much like nicotine e-liquid, vaporised marijuana oil does not emit a pungent odour.

There are opportunities in the following product areas.

Even in states where marijuana is illegal, companies can capitalise on the emerging demand for vapour-friendly cannabis products by creating rechargeable heat-not-burn vaporisers. A legitimate market for these already exists because some consumers who smoke tobacco prefer to vape the leaves.

In those other states where marijuana is legal, products designed to vape plants are likewise the best option for quickly entering the growing cannabis market, because most consumers purchase dry marijuana. Again, a heat-not-burn product that vaporises ground herbs – whether cannabis or tobacco leaves – gives companies the opportunity to double-dip in two markets with one product.

Moreover, as with tobacco, vaping marijuana is probably a healthier option than smoking the plant. E-cigarette companies should avoid making health claims, but consumers are likely to be receptive to c-cigs that allow them to use cannabis without smoke inhalation, the pungent odour, and the lingering aftertaste.

In these markets where marijuana is legalised a further opportunity also exists for vapour companies to mass-produce liquid containing tetrahydrocannabinol (THC) – the chemical substance responsible for the user’s high – enabling consumers to safely acquire marijuana oil without risking the problems inherent in making a homemade batch (see below). Likewise, with innovative technology, e-cig companies could easily offer consumers an e-spliff hybrid of nicotine-containing e-liquid and cannabis.

A solution to homegrown problems?

The difficulties and dangers of producing marijuana oil at home mean that many consumers would welcome the arrival of a c-cig on the market.

Firstly, there are many different strains of marijuana. Some are high in THC, which has strong psychoactive effects, while others are high in cannabidiol (CBD), the chemical substance touted for its therapeutic benefits. If the consumer cannot get the same strain each time, they may experience a different type of high.

This is particularly problematic when vaping, because the high from marijuana oil is much more intense than the high from smoking the plant: the oil is a concentrated extract. A mass-produced cannabis cigarette, or c-cig, could reduce inconsistent results and uncertain highs. A well-equipped manufacturer could provide consistent results from thousands of identical plants, which would result in the same level of THC/CBD concentration in every c-cig.

Moreover, the process of making marijuana oil is very dangerous. Many “recipes” call for the use of butane gas, which is extremely flammable and explosive. Harmful chemicals such as sulfur dioxide may also be involved.

At federal level, cannabis remains a “Schedule I substance” under the Controlled Substances Act of 1970, which means its use, possession, sale, cultivation, and transportation is illegal. All Schedule I substances are purported to lack medicinal benefits and have a high potential for abuse.

Nevertheless, the federal government has condoned marijuana’s decriminalisation by states, for both recreational and medicinal use, as long as the individual state puts in place a regulatory system.

The U.S. Food and Drug Administration (FDA) would have regulatory authority over medical marijuana as a drug product, but it has not approved any product containing or derived from the plant to date. However, it has approved a drug that contains a synthetic marijuana substance, as well as another with a synthetic substance with effects similar to marijuana.

Cannabis cannot be integrated into the FDA’s proposed deeming regulations for tobacco products because it is not a tobacco product itself (although it is often consumed mixed with tobacco).

At state level, there are four different approaches:

In total, 39 states have laws in effect to permit marijuana use/possession to some extent.

Many states are contemplating legislation or ballot initiatives to legalise cannabis. For example, Ohio could be the first in the Midwest to do so when its citizens vote on a constitutional amendment on cannabis in November.

Perhaps surprisingly, many of the states that have legalised or decriminalised marijuana use, or are considering doing so, have also proposed or enacted stringent e-cig regulations. This may be because while marijuana has grown in acceptance by the public and policy-makers, the stigma of smoking attaches to vaping.

For example, Hawaii – one of the states leading the regulatory movement to restrict use of, and access to, e-cigs – has permitted the use of medical marijuana for 15 years. And New York, which has also long opposed e-cigs, allows patients prescribed medical marijuana to vaporise the drug (but not to smoke it).

The following products are among those taking advantage of the emerging U.S. market for cannabis-focused vapour.