France tops the U.S. for vape store distribution, according to a new report from ECigIntelligence.

The country has more vape stores per head of population and per 10,000 square miles than either the U.S. or the UK, the report found.

The study is the second edition of ECigIntelligence’s annual look at the evolution of vape stores in the U.S. Total number of stores in each state was compared with the numbers in each French region and each British county.

It revealed that France has a more even spread of vape stores than either the U.S. or the UK, both territorially and per head of population.

In the U.S. it found wide variations from state to state. Some states show a high density of shops on the ground but low representation in terms of population, particularly on the Atlantic coast where there are a number of small states with high population density. 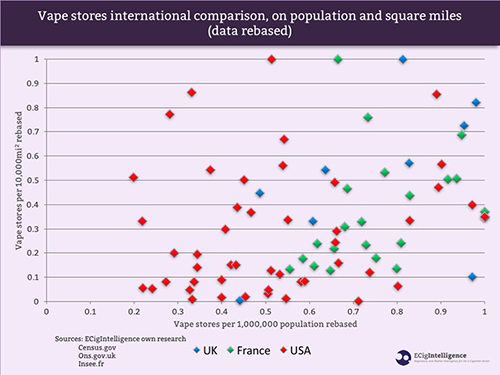 No UK county had extremes as low as the U.S. in terms of vape stores per 1m population, but many fell behind France.

“France is probably the most advanced and equal market in term of differences throughout the regions,” the report says. “While the distribution per population is high and quite standard, regional differences in terms of vape stores per 10,000 square miles are bigger; however in general the grouping in France is tighter than in either the UK or the U.S.”

The report excluded London, Paris and New Jersey from its international comparison due to the extreme variations these would have brought in.

ECigIntelligence’s report examines how vape shop distribution in the U.S. has evolved from 2015 to 2016. It found significant growth in overall numbers but also that access remains very poor in some states.

ECigIntelligence subscribers with the appropriate subscription level can access a copy of the report here. For more information on subscriptions, please review the options here.